Are you suffering from rope-like knots of bulging blood vessels on the surface of your skin? If so, you’re probably suffering from varicose veins and you need immediate treatment.

Varicose veins are essentially blood vessels with excessive accumulated blood. It’s caused by a dangerous circulatory disorder called chronic venous insufficiency. This is a condition in which your vein valves — usually responsible for smooth blood circulation to the heart — fails and causes blood to blow backward and pool around your leg veins. The accumulation of blood in the veins leads to varicose veins. 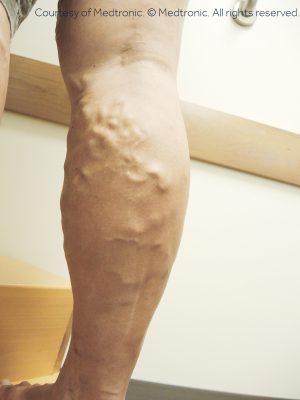 The only way to treat varicose veins is to shut down or remove the underlying diseased saphenous vein. In the past, the only way to do so was through complex and risky surgical procedures like vein ligation and venous bypass surgery. In addition to being surgical and complex, these procedures had a fairly high risk of side effects and complications.

However, thanks to modern medicine and advancements in technology, varicose vein treatment in 2019 is a lot easier and safer. Nowadays, varicose veins and venous insufficiency can be treated with minimally invasive and non-surgical procedures that carry a negligible risk of side effects and don’t even lead to a recovery downtime. In this article, we give you a detailed overview of the top varicose vein treatments 2019.

Radiofrequency thermal ablation is a procedure in which the vein doctor uses heat energy to destroy the diseased saphenous vein.

The thermal energy irritates the vein walls and eventually collapses the affected vein. The accumulated blood automatically reroutes to healthier veins. The diseased vein hardens and eventually gets absorbed by the body.

The entire radiofrequency ablation procedure concludes within an hour. It also carries a negligible risk of side effects and, at most, you’ll feel slight soreness for a while. This procedure is considered to be medically necessary so it’s also covered by insurance.

Endovenous laser ablation is a procedure in which the vein doctor uses laser energy to destroy the diseased saphenous vein.

Once the affected saphenous vein collapses, the accumulated blood reroutes to healthier veins and the vein eventually hardens and gets absorbed by the body.

This entire procedure is conducted in-office and it concludes within an hour. While laser treatment also carries a negligible risk of side effects, it does cause more post-procedural discomfort, which is why it’s not the favored varicose vein treatment. Since it’s medically necessary, it’s covered by insurance.

This is one of the latest varicose vein treatments and it has only recently been approved by the FDA, which is why it’s not yet covered by insurance. As such, if you seek VenaSeal treatment, you’ll have to pay for the entire cost of treatment out of your pocket.

Ambulatory Phlebectomy is a procedure in which the vein doctor creates several incisions on the surface of your skin to physically remove the superficial varicose veins. This procedure is usually conducted after the primary venous insufficiency treatment is done.

As such, after the vein disease has been treated, this procedure can be used to remove the superficial veins. This procedure is also completely safe and has a minimal risk of side effects. However, this procedure is considered to be a cosmetic treatment so it’s not covered by insurance.

Sclerotherapy is used to treat the spider veins and superficial varicose veins after the primary venous insufficiency treatment is done. After the saphenous vein has been closed, the vein doctor will inject a solution into your spider veins to seal them shut as well. The medicine will fuse the vein walls so they turn into scar tissues and eventually get absorbed by the body.

Sclerotherapy is also considered to be a cosmetic treatment since it doesn’t treat the underlying vein disease. As such, you can’t get insurance coverage for sclerotherapy. However, in some cases, we use some of the remaining medicine from the primary venous insufficiency treatment to treat your spider veins as well at no added cost.

Treated Varicose Veins in an Hour!